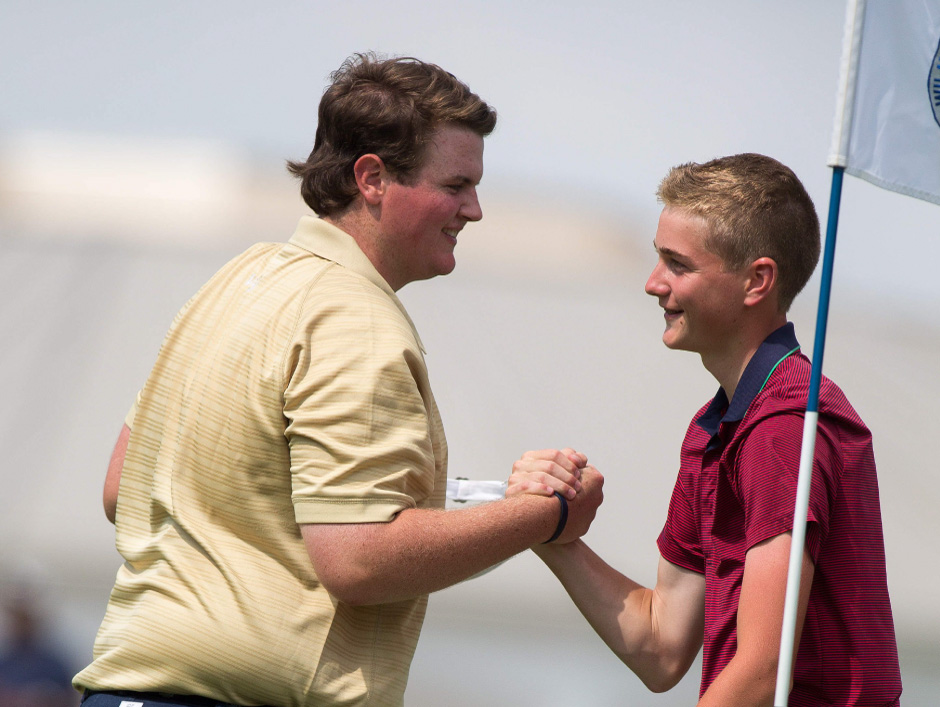 Liam Murphy (left), of Salesianum, shakes hands with Austin Barbin of Red Lion Christian after winning the state golf championship by five shots with a closing round of 69.

Matt Smith of Tower Hill shot a 76 on Tuesday to take a one-stroke lead in the individual standings in the DIAA Golf Tournament at Wilmington Country Club.

Smith didn’t manage a birdie on Wilmington’s difficult South Course, but limited the mistakes to three bogeys and a double bogey on the par-71 layout.

Salesianum’s Reed Winkler and Liam Murphy and Red Lion Christian’s Austin Barbin each shot 77. Murphy, the defending individual champion, will tee off with Barbin and Smith in the final group at 10:51 a.m. in Wednesday’s final round.

Esther Park of Charter of Wilmington, William Haskell of Appoquinimink and Ryan Cleary of Tower Hill each shot 78 on Tuesday. Ryan Rucinski of Salesianum shot 79 and will start the final round three shots back.

A total of 60 players shot 94 or better to make the cut for the final round.

ROUND 2 Highlights – Wednesday, May 27

Salesianum senior Liam Murphy fired a career best round of 69 to give him a total of 146. Red Lion Christian Academy’s Austin Barbin (151) finished tied for second along with Salesianum’s Reed Winkler (151). Sallie’s teammate Ryan Rucinski (153) finished 4th, and Tatnall’s Kevin Levitsky (154) rounded out the top 5.

A highlight of Austin Barbin’s second round was shooting even par on the difficult front nine of Wilmington Country Club’s South Course. Austin’s 2nd place finish as an eighth grader is the best finish to date for an individual from Red Lion Christian Academy at the State Tournament.