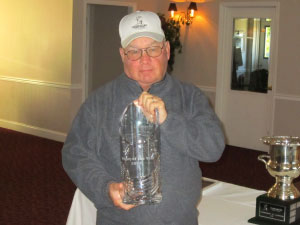 CBGC’s Playoffs concluded Sunday with the top players on our Player of the Year Points List competing in the Tournament of Champions. Tom Vincenti is the winner of this year’s Champion’s Cup with a Net Score of 72.  Congratulations to Carlos Coleman for winning Chesapeake Bay Golf Club’s 2014 Player of the Year Award with an outstanding 2,943.75 year-end points list total. Thanks to all of our Members for a great golf tournament season!

Way to go Carlos Coleman – our 2014 Chesapeake Bay Golf Club Player of the Year. His consistent, solid tournament play all year earned him 2,943.75 total points to take the coveted title.