Evan Barbin (pictured left) advances to the Subregional competition of the 2017 Drive Chip and Putt Championship. 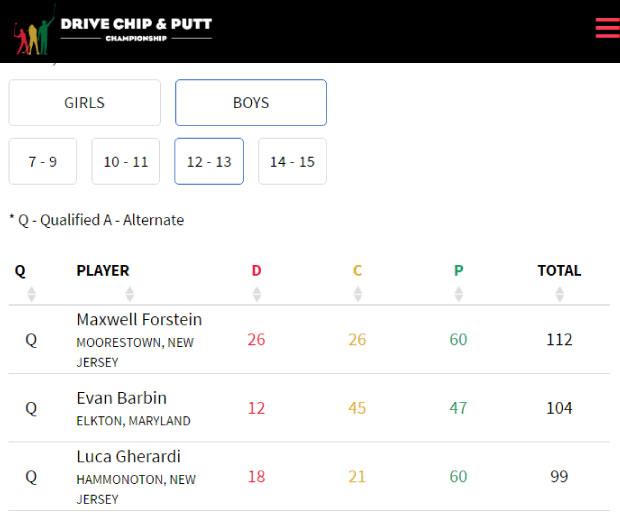 About the Drive Chip & Putt

A joint initiative founded in 2013 by the Masters Tournament, United States Golf Association and The PGA of America, the Drive, Chip and Putt Championship is a free nationwide junior golf development competition aimed at growing the game by focusing on the three fundamental skills employed in golf. By tapping the creative and competitive spirit of girls and boys ages 7-15, the Drive, Chip and Putt Championship provides aspiring junior golfers an opportunity to play with their peers in qualifiers around the country. Participants who advance through local, sub-regional and regional qualifying in each age/gender category earn a place in the National Finals, which is conducted at Augusta National Golf Club the Sunday before the Masters Tournament and is broadcast live by Golf Channel.

The Drive, Chip and Putt Championship will be conducted in four stages:

Local qualifying:
To be conducted throughout May, June, July and August 2016 at 253 sites in 50 states.

Subregional qualifying:
To be conducted throughout July and August, 2016 at 51 sites.

Regional qualifying:
To be conducted throughout September, 2016 at 10 sites.