Chesapeake Bay Golf Club junior golfer Austin Barbin qualified on August 3, 2015 at Aronimink Golf Club in the Boys 14-15 Division to advance to the Regional Qualifier of the 2016 Drive Chip & Putt Championship at Congressional Country Club on Sunday, September 20, 2015. At the Regional Qualifiers, one junior will advance in each age and gender category and rounds will be played at 10 host sites in 10 defined regions. The remaining 80 participants will play at the Drive Chip & Putt Finals at the Augusta National Golf Club on April 3, 2016 on the eve of the 2016 Masters. 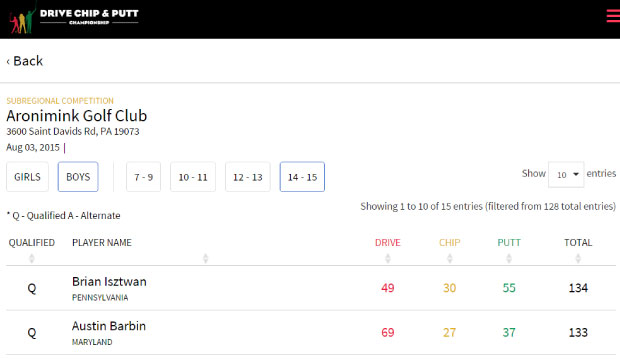 About the Drive, Chip & Putt Championship

This youth golf development initiative includes boys and girls ages 7-15, who will compete in separate divisions in four age categories. In only its third year, the Drive, Chip and Putt Championship will provide playing opportunities throughout all 50 states during the months of May, June, July and August. Top performers at the local level will advance through local, sub-regional and regional qualifiers in July/August and September, respectively. The top 80 performers – 40 boys and 40 girls – will earn an invitation to the National Finals at Augusta National on Sunday, April 3, the eve of the 2016 Masters.

The breakdown and schedule of the 2016 Drive, Chip and Putt Championship qualifying is as follows:

Stage 1: Local Qualifying (May – August)
Qualifying rounds are played at 253 host sites spread throughout all 50 states. Three juniors advance in each age and gender category from every venue.

Stage 2: Sub-Regional Qualifying (July – August)
Two juniors advance in each age and gender category from every one of the 50 host sites spread in 45 states across the country.

Stage 3: Regional Qualifying (September)
One junior will advance each age and gender category and rounds will be played at 10 host sites in 10 defined regions.

Stage 4: Championship Final (April 3, 2016)
The remaining 80 participants will play at the Finals at the Augusta National Golf Club.